Rank Match is the ultimate place where players battle it out to reach the top placements amount the competitive Hyper Universe community. While the matches function no differently than a Regular Match including the penalties for leaving the match or lobby, they hyper select phase begins after a drafting phase. Team leaders are able to ban hypers from play and each team takes turns picking hypers to play. Ranked matches provide similar rewards to regular matches along with a number of unique prizes. Ranked matchmaking is completely separate from regular match matching. Individual progress made within ranked matches are tracked and applied solely to this mode.

To be eligible to play ranked matches, players need to achieve an account level of 15 and have unlocked 12 hypers. Hypers on free rotation are also calculated in number of unlocked hypers; this can lower the number of hypers a person might need to play ranked to a minimum of 6 hypers. While not required, it is recommended that the player understand as many of the elements of regular play (objectives, hyper skills, etc) as possible before queuing ranked. Similarly, players should be able to competently play at least 12 hypers due to hypers being banned in the draft lobby while being familiar with all hypers in the roster. As you beginning scoring within ranked mode, your position on a given team may change. From left to right, the team is placed from the player with the highest rank to the lowest. The player in the leftmost position is in control of banning hypers and is able to select their hyper before the others.

There are three phases in the ranked lobby: ban, draft, and swap 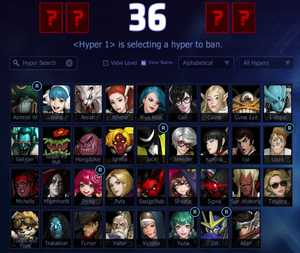 The Ban phase allows each team to remove 2 hypers from being selectable in the match. The player in the first position of each team is in control over what hyper gets banned, and the left team (Team A) selects their ban first. Afterwards, the right team (Team B) bans another hyper. After each team bans 2 hypers (4 in total), this phase progresses to the draft phase.

In the Draft phase, each team selects their hypers. Team A selects first and the order progresses in a 1,2,2,2,1 fashion. Written another way, the draft phase progresses like this:

A hyper is selectable once. This means that if a hyper is banned or selected by either Team A or B, no other team may select that hyper for play. Once both teams have selected that 4 hyper roster, this phase transitions to the swap phase.

In the swap phase, players are able to switch the hyper they have selected in the draft phase with another hyper their teammates selected. Once all of the Hypers have been selected for both teams you

will have a moment to try and switch Hypers between players on  your own team. A box above the Hyper will pop up saying “Hyper Swap”. If you click on this you will send a request to that player that will ask them if they would like to switch their Hyper with yours. If they confirm it then the two Hypers will be swapped. If they accept you will see a “Hyper Swap Completed” dialogue box. If they decline the swap you will see a “Your trade has been rejected” dialogue box. Use this time to adjust the time orientation as well as select the skin for your hyper.

The current ranks are: